Wine is heralded as the sophisticated drink of the ages. Drinking wine has been associated with people considered cultured and research shows that wine drinkers have higher IQs than that of people who drink different alcoholic beverages. The reason for this association with elegance stems back to the days when wine was considered for the upper classes because of its expense. Wine, comparative to beer, takes longer to manufacture and one acre of grapes will produce less wine than an acre of barley. However, research is showing new evidence that drinking wine isn’t just to look classy; it’s beneficial for your health too. Also, it’s a excellent drink for your stag do in Budapest.

Wine has a variety of nutrients, though most of the time you won’t find the nutrition on a wine bottle label. This is partly due to the fact that the US Food and Drug Administration doesn’t like to classify alcohol as a daily part of nutrition. The other reason is that identifying the exact nutritional properties of wine is difficult because it requires over 200 phenolic compounds to be documented within a myriad of confines (Source1). However, research is discovering new nutritional facts about wine every day.

Wine itself comes from fermented grapes which contain many vitamins and minerals. When wine is created, many of these nutrients carry over. Wine contains vitamin B, potassium, iron, manganese, fluoride, and phosphorus. These different vitamins aid in giving you energy, strengthening bones, and benefit the brain, liver, and nervous system (Source2). Wine also contains many antioxidants which help combat the damages of aging and may help reduce the risk of heart disease. Polyphenols, quercetin, and resveratrol are some of the active principles in wine, especially red wine, that have shown great promise in researched health benefits (Source3).

Polyphenols are an antioxidant found in grapes and other foods like legumes and green tea. The most common type of polyphenol is flavonoids. The tannins found in red wine have a variety of flavonoid polyphenols (Source4). Quercetin is another antioxidant which protects muscles and the heart (Source3). It is important to note that research may show more health benefits to drinking red wine than white wine. 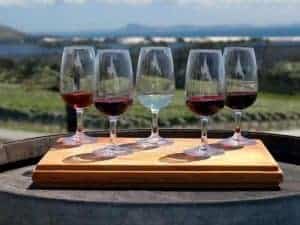 Resveratrol is a polyphenol in wine that research has shown to have a high amount of health benefits. Resveratrol has antioxidant properties that are believed to aid in circulation, reduce the chance of blood clots, improve brain function in learning, mood, and memory, along with treating inflammation. It is also effective in treating depression. Resveratrol even produces similar health effects as what you would experience from exercise. This discovery could be a major breakthrough for people who are unable to exercise with health conditions that require exercise (Source4).

Resveratrol was first found to be a cancer preventative. Using its antioxidant capabilities, it can prevent or delay a score of chronic diseases, including Alzheimer’s disease, diabetes, cardiovascular disease, other neurodegenerative diseases, and possibly osteoporosis. Resveratrol is mainly found to aid in preventing age-related disorders (Source5, Source6). However, some studies found that the resveratrol in wine was not enough for significant benefits and a supplementation was suggested instead. You should also be aware that red wine contains much higher amounts of resveratrol than white wine because it is fermented longer (Source7).

Reducing the risk of heart disease and mortality due to a heart attack is one of the most well-backed arguments for the health benefits of wine. The case for wine began with something called the “French Paradox” (Source8). Unless you live in France, you may not be aware of the extremely low heart-attack rate there. Researchers decided to investigate this and found that between France and Northern Ireland, French men had a low risk of ischaemic heart disease because of their regular, moderate drinking versus the binge-drinking more prevalent in the Irish Lifestyle (Source9).

While much research has shown any alcohol drunk in low to moderate amounts does reduce your risk of heart disease, several studies show that wine is the best alcohol with the most improvement. More in-depth studies show that resveratrol and proanthocyanidin are mainly responsible for the protection of your heart through wine (Source10). The way that resveratrol accomplishes this is by first maintaining and protecting the heart muscle and also lowering your chance of developing blood clots. By using its antioxidant properties, resveratrol fights cell death and oxidative stress to protect the heart against protein breakdown. It also has an antithrombotic effect which expands blood vessels to aid in circulation (Source4).

Lowering the Risk of Cancer

Research has shown wine to reduce the risk of colon, ovarian, prostate carcinoma, and basal cell cancer. Studies have shown that having one glass a day can lower your risk of cancer in your esophagus, in your lungs, and even lower your chance of relapsing or developing new cancer during the five year period after diagnosis. A glass of wine a day may not just help you prevent cancer; it may actually help you defeat it too! The reason for this is our favorite wine compound, resveratrol (Source11). Resveratrol can suppress the growth of cancer tumors and kill cancer cells. Evidence suggests that Resveratrol actually binds to the DNA of a cell to prevent inflammation and target malignant cells to destroy them (Source12).

Reducing the Dangers of Aging

We all hate the idea of aging, but what you might hate even more are the numerous dangers that come with it, from dementia to losing eyesight to strokes. Wine may be the key to change a lot of that. Aging happens when oxidation of the cells occurs which damages the cell and the DNA. Because of wine’s high amount of antioxidants, a light to moderate daily drink of wine could protect your cells and DNA from oxidizing. Research first believed that this effect was due to the ethanol in alcohol. However, a study on the oxidation of cholesterol used red wine, white wine, and ethanol. Red wine showed the effect of inhibiting cell oxidation (Source13).

Other studies which compared the health benefits of alcohols found that wine could protect you from a stroke better than other alcohols like beer and spirits. Their belief was that the compounds in wine worked together with the ethanol to produce better results (Source14). Wine was found to lower the risk of dementia, prevent age-related decline in cholesterol levels and inflammation, and even to activate genes that sustain your life longer (Source15,Source16,Source17).

Type II diabetes is a chronic illness that makes it hard to keep blood sugars low, maintain a healthy weight, and continue a healthy life. Sufferers often have to keep very strict diets along with several medications. However, wine on a regular moderate basis can actually help prevent diabetes and help keep it under control as well. Several studies on rats have shown promise as the resveratrol in wine lowered both blood glucose and triglyceride numbers. Other studies showed that it reduced the diabetic neuropathic pain that many people with diabetes struggle with (Source18). Red wine has also shown benefits in lessening insulin resistance which in turn, also lowers blood sugar levels (Source19). While wine has been shown through several studies to improve these numbers, it is also important to note that the biggest improvement was alongside a healthy diet (Source20).

Many of us were taught from an early age to brush your teeth every day. However, sometimes that is not enough to get rid of the bacteria on our teeth. Bacteria can into a biofilm which creates plaque. Aside from a dentist scraping it off our teeth, plaque can be difficult to get rid of. Even fluoride and antimicrobial rinses may not be enough. The great news is a study came out with evidence to show that red wine can help get rid of the pesky bacteria. All of the solutions using red wine, even dealcoholized red wine showed almost complete and early removal of the plaque bacteria (Source21). Apparently, a glass of red wine a day could keep the dentist away too!

Wine has a myriad of health benefits, especially red wine. Research continues to show promising results in that area, even to the point of possibly using components such as resveratrol as a supplement to guard your heart, brain, and against cancer.

It blows me away how much a few fermented grapes can accomplish. However, with any alcohol, the benefits can become hazards if you drink too much. Moderation is usually defined as two glasses for men and one glass for women of five ounces of wine. Drinking more than this is not recommended as it could give you a higher risk for diseases. Wine isn’t just for looking classy anymore; it’s for keeping you healthy.